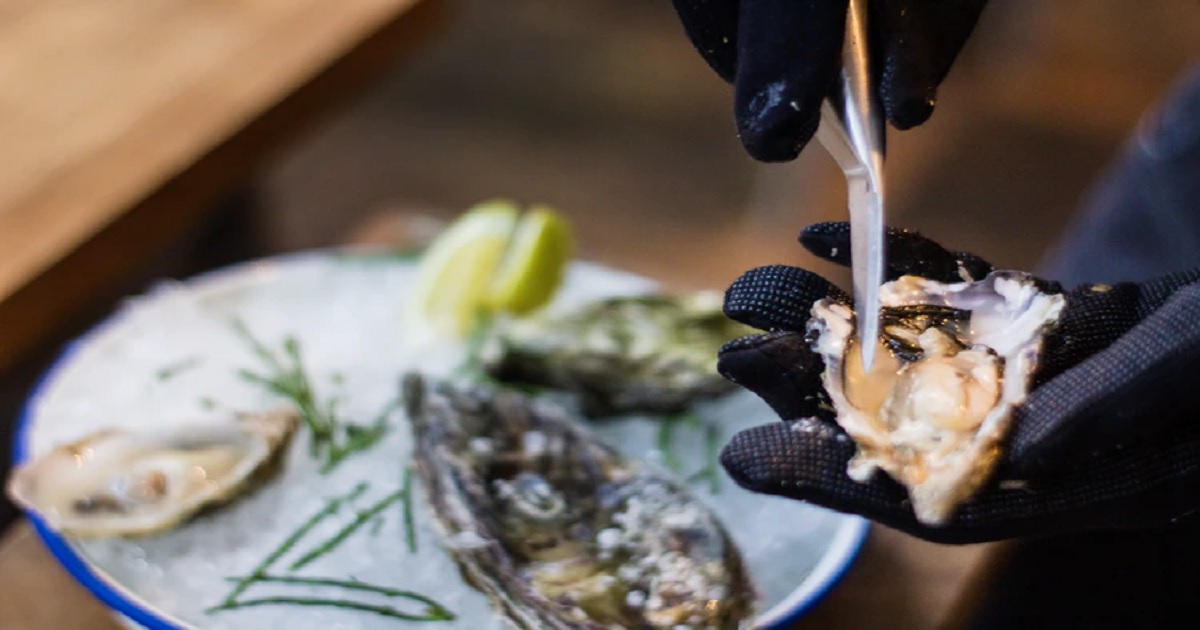 Get ready to shuck and swallow at the 21st annual Arcata Main Street’s Oyster Festival from 10 a.m. to 5:30 p.m. on June 18, 2011 at the Arcata Plaza. The Oyster Festival highlights and celebrates the plump and sweet Kumamoto oyster from Humboldt and Arcata bays by pairing of all-you-can-eat barbecued oysters and award-winning, local microbrews from Lost Coast Brewing Company and Mad River Brewing Company.

In addition to the grilled mollusks and frosty beverages, the event also features performances by S.F. old-school funk band Vinyl; Humboldt’s own Tom Petty tribute band, Full Moon Fever; and local reggae-roots band Woven
Roots. If that’s not enough to draw you to the historic plaza on June 18, the festival will also feature a rock-climbing wall and mechanical bull from North Coast Adventure Centers and will be located in the Pacific Outfitters
parking lot.

In between the eating, drinking and slurping, KWPT 100.3 FM &102.7 FM “The Point” presents a Shuck & Swallow competition, where four-time defending champions Aidan Semingson (the shucker) and Conor Eckholm (the swallower) try to win their fourth-straight gold Shuck & Swallow belt. This dream team can shuck and eat more than 35 raw oysters in five minutes and is looking for some suitable challengers this year.

The event also features the Oyster Calling contest hosted by one of the most familiar faces in Humboldt County television, Dave Silverbrand. Participants try to yell out what an oyster call would sound like if the oyster were to ask all his friends to join him at the Oyster Festival. There’s also an oyster-food judging contest where the winners will receive a special award from recycled glass makers Fire & Light. A panel of hand-picked judges will get a chance to taste all the raw oyster entries on Friday night, before the festival at Jacoby’s Storehouse. This year, the raw oyster champions will be announced at 12:30 p.m., so event goers will be able to try these award-winning oysters during the festival.

If you’re bringing the whole family, a play area for the kids will be between Eighth and F & G streets. We’ll have waxtivities, balloon making and Shantaram the magician.

The musical entertainment kicks off at 11 a.m. with Woven Roots, followed by Full Moon Fever at 1 p.m., then ends in a bang with Vinyl at 3:30 p.m. If oysters and beer is not your style, then a variety of alternative cuisine
choices and wine will be available – everything from the premium wine sold at the Libation booth to the chicken wings from Calhoun’s Original South Side Bar-B-Que to hot dogs and fish tacos.

Festival officials ask that you pay special attention to the recycling and trash bins throughout the event as almost every product at the festival will be recycled, recyclable or properly disposed of by the North Coast Resource
Center. Your recycled oyster shells will be donated to the local fish hatcheries to help them with their aquaculture projects.

The Oyster Festival begins at 10 a.m. and the evening will conclude at 5:30 p.m. All ages are welcome and all adults wishing to buy alcohol must produce and show current I.D. Non-refundable $6 beer tokens and $3 I.D. wristbands
can be purchased at the corner booths at the Plaza.

All the funds raised at this special event – from the beer tokens to the booth fees to the wristbands – will support Arcata Main Street’s non-profit, artistic events like Arts! Arcata, Concerts on the Plaza, Trick or Treat
Around the Plaza, Season of Wonder & Light and many other organizational programs that foster a sense of pride and community in downtown Arcata. Your generous donations will keep Arcata Main Street and the Oyster Festival
alive!

Self-described 21st century California Regionalist painter, Beverly Harper generously offered to design this year’s colorful Oyster Festival poster and save the date cards. You may have seen her oil on canvas, landscape of the
Arcata Plaza circulating around town. Mrs. Harper works from her studio in Trinidad and also from her country home in Freshwater. She graduated from Chico State University with a BFA degree and her work is featured at
Meridian Fine Art in Arcata.

If festival goes wish to avoid the long beer lines throughout the day and also wish to make a more sizeable donation to Arcata Main Street, AMS will be selling a Front of the Line Pass for $20 at the AMS offices located in
Jacoby’s Storehouse and at the Oyster Festival Ball. The $20 will support future Arcata Main Street programs like Picnics on the Plaza and you’ll be able to get your beer on before anyone else.

New to this year’s event, the Oyster Festival Ball and Fundraiser will take place on Friday, June 17th at 7 p.m. in Jacoby’s Storehouse Plaza View Room on the third floor. This event is open to the public for $15 and there will
be appetizers, beverages and live music from the good vibes, acoustic, coastal-rock band, Headshine. You’ll also have a chance to buy an official Oyster Festival T-shirt and a Front of the Line pass before the big day.

So, come down to the Plaza on June 18 and join us in our quest to consume
thousands of oysters while doing some good at the 21st annual Oyster
Festival put on by Arcata Main Street.

Oysters were too delicious to be celebrated in only one part of the world. So the entire world celebrates its love for oysters on different days throughout the year. This flavorful fresh meat trapped inside a pair of shells sprinkles happiness to everyone who loves them but oyster festivals create extra joy with the fun activities and contests. Narooma Oyster Festival is not different from that aspect of an oyster festival but it is renowned in the world for its grandeur. This multiple award-winning Oyster Festival is a celebration of South Coast NSW oysters along with the region’s natural clean quality produce, chefs, and rich artistic, cultural talents.

The Chesapeake Bay Maritime Museum organizes an oyster festival in St. Michaels, Maryland each year. The Oyster Fest is a grand celebration of oysters with delightful dishes made of oysters along with freshly harvested local Chesapeake oysters. This is a once-in-a-year chance to sip, slurp, and savor some good oysters while having fun.